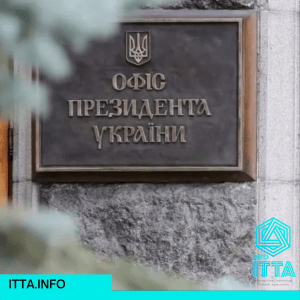 KYIV. Oct 6 (Interfax-Ukraine) – The Office of the President of Ukraine fully supports the public condemnation of the actions of the management of the state-owned Ukreximbank, who attacked the journalists of the Schemes TV program during the recording of an interview in the bank’s building, and considers it logical to suspend Ukreximbank Board Chairman Yevhen Metzger while the incident is being investigated.

According to the press service of the head of state, a statement was made by advisor to the head of the President’s Office Mykhailo Podoliak.

“The situation around Ukreximbank can only be perceived negatively. Of course, the model of behavior that society has seen from the bank’s representatives is unacceptable. Freedom of speech belongs to fundamental values in Ukraine. Therefore, the duty of officials of any level is to communicate correctly with journalists and respect their right to ask any questions of public importance,” Podoliak said.

He said that it does not matter what level of structure this establishment occupies and whether it operates in the public or private sector.

“The rules of respect for journalistic work and the formats for providing access to socially important information have long been worked out, and there can be no reason not to observe them,” the advisor to the head of the President’s Office said.

The National Police and the Supervisory Board of Ukreximbank have made relevant statements. In particular, the National Police, within the framework of the initiated criminal proceedings, are analyzing all the circumstances of the incident, and the Supervisory Board announced that an audit was carried out within the framework of the rules approved for the state bank.

“Also, at the level of the Supervisory Board and in accordance with the procedures in the bank, moderation of the further development of this situation for the financial institution can take place,” the President’s Office said.

They add that, at the very least, the decision to remove the chairman of the bank’s board from his post seems logical, “so that there is not a single, even hypothetical, obstacle to investigation and verification.”

“As a maximum for leveling the damage, the bank and the state need, perhaps, more stringent personnel decisions in a financial institution. Institutional mechanisms for getting out of this situation are envisaged, and they must work,” the President’s Office said.

As Radio Liberty earlier reported, on Monday, October 4, the camera crew of the Skhemy (Schemes) television program was attacked during an interview with Ukreximbank Board Chairman Yevhen Metzger, allegedly because of one of the questions they did not like. According to the head of Schemes Natalia Sedletska, the bank employees took away two cameras, took away the cards on which the recording was carried out, and deleted the recorded video. According to journalists, all this time the camera crew remained locked in the office of the head of the bank’s board in his presence. An hour later, the equipment was returned to the camera crew, but the video of the entire interview and the attack itself was removed.

The police in Kyiv reported that, at the request of journalists, the necessary investigative actions are being carried out, criminal proceedings have been started under Part 1 of Article 171 of the Criminal Code of Ukraine – obstruction of the legitimate professional activities of journalists.

Ukreximbank rejected the accusations of violating the law and, in turn, accused them of provocation and an attempt to seize banking secrets. According to the financial institution, the actions of the journalists contained signs of both illegal seizure of bank secrets and violation of the Code of Ethics of a Ukrainian journalist in terms of using illegal methods of obtaining information.

The bank said that in this situation, it is considering the possibility of contacting law enforcement agencies and bodies regulating activities in the field of television and radio broadcasting.

Metzger was appointed head of the bank’s board in March 2020. The head of the supervisory board of the financial institution is an independent member Oliana Hordiyenko. Dimitri Chichlo, Serhiy Konovets, Dominique Menu and Laszlo Urban are also independent members of the Supervisory Board. The Cabinet of Ministers is represented by Yuriy Butsa, the Verkhovna Rada by Yuriy Terentyev, and the Office of the President by Viktoria Strakhova.

According to the National Bank of Ukraine, as of June 1, 2021, Ukreximbank ranked third in terms of total assets (UAH 252.350 billion) among 73 banks operating in the country.