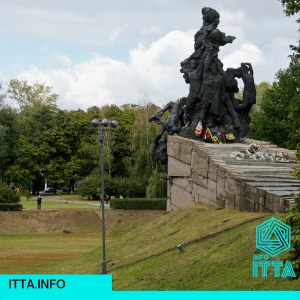 KYIV. Oct 6 (Interfax-Ukraine) – The first 159 names of Nazi soldiers who killed Jews in Babyn Yar in 1941 were announced by the Babyn Yar Holocaust Memorial Center.

During 80 years, despite the large amount of evidence collected after the war, the criminals have not been convicted, the Holocaust Memorial Center’s press service said on Wednesday.

“The Memorial Center began collecting evidence and testimonies revealing the truth about the terrible tragedy. And on the 80th anniversary of the Babyn Yar tragedy, it released the first part of an extensive study on those who killed Ukrainian Jews on September 29 and September 30, 1941. Then, in just two days at least 33,771 people were shot at Babyn Yar,” the message says.

It notes that despite the fact that the commanders of Nazi units carrying out the murder are well known to historians, the new information released by the Babyn Yar Holocaust Memorial Center describes in detail the biographies and testimonies of commanders and ordinary soldiers who killed Jews, women and children, young and old in Babyn Yar.

“Despite the confession, evidence and testimonies that were provided back in the 1960s by some Nazi soldiers who committed the murders, only a small part of those involved were tried for their terrible crimes. In order to identify everyone who was involved or took a direct part in the executions of Jews in Babyn Yar, the Holocaust Memorial Center created a scientific working group,” the Center said.

They clarify that the members of this group established not only the fact that hundreds of German soldiers, police officers of the SS personnel were involved in the shootings in Babyn Yar, but also revealed to the world the names of the first 159 Nazis who participated in the murder.

“These were people from all over Germany and other countries under Nazi control. They were between 20 and 60 years old. Some were educated, others were not. Engineers and teachers, drivers and salesmen were among them. Some were married. The vast majority after war has returned to normal life,” the message says.

It is noted that most of the soldiers who committed the massacre testified in court and were found not guilty, with the exception of a few commanders and regular soldiers.

“Some of them killed, the next group convoyed Jews from their homes, while other seized their belongings and luggage. Some of them gave weapons, while other served sandwiches, tea and vodka to the killers. All of them are guilty of that massacre. Everyone who was somehow involved, either directly or indirectly, must be found guilty,” Father Patrick Desbois, head the Academic Council of the Babyn Yar Holocaust Memorial Center and founder of the Yahad-In Unum organization, said.

Desbois cited the minutes of a German murderer’s testimony that executions continued from early morning until 5:00 p.m., killing thousands, after which soldiers were treated to a feast and alcohol, and women were brought to them.

One of the killers featured in the testimony said during the investigation that after the Babyn Yar massacre, his unit was sent to a resort in order to “recover” before returning to the frontline, he said.

The studies conducted by the memorial center send a signal that “if you take part in genocide or a massive crime against humanity today, you will be held accountable for it,” Desbois said.

“Only few of those men turned themselves in to judicial authorities after World War II… though a lot of them admitted to their role in post-war testimony. All of these men continued to lead a quiet, normal life after the war,” Andriy Umansky, a historian and deputy chairman of the Academic Council of the Babyn Yar Holocaust Memorial Center, said.